The Ateneum Art Museum is closed due to renovation

The Ateneum Art Museum is closed to the public due to ventilation renovation starting 28 March 2022. The museum shop and the Ateneum Bistro are also closed during the renovation. The museum will reopen in the spring 2023 (the date to be announced separately).

Sculptor Kaarina Kaikkonen created two commissioned works that were displayed at the Ateneum Art Museum courtyard and the small park facing Keskuskatu. Known for her spatial installations, Kaikkonen was the first to feature in a new series of works for the Ateneum courtyard by contemporary artists. Works by Kaikkonen, who is one of Finland’s best-known contemporary artists, have been exhibited to great critical acclaim both in Finland and abroad. The works were on display free of charge.

Kaikkonen’s two works, Falling Light and Blooming Spirit, discuss a subject matter that is absolutely central to all life – light. Light has carried many symbolic meanings throughout the history of art. It is associated with religion, with the natural cycle of the seasons, and the ups and downs of human existence.

Falling Light, on display in the inner courtyard of the museum, and Blooming Spirit, which was installed outdoors in the park by Keskuskatu, are independent works but with a thematic link. The work outdoors is reaching up and out towards the spring, while the installation in the courtyard shows a touch of darkness.

The material in both works is used shirts, which Kaikkonen has collected as donations. The donated shirts have their own, unique circle of life, as they are reborn over and over again, as the installations change shape. The shirts seen in the works displayed at Ateneum have in their previous lives appeared for instance in the garden of Didrichsen Art Museum, as part of a work in 2015. Used shirts are an important medium for Kaikkonen, because inside every shirt, there has once beaten a heart. 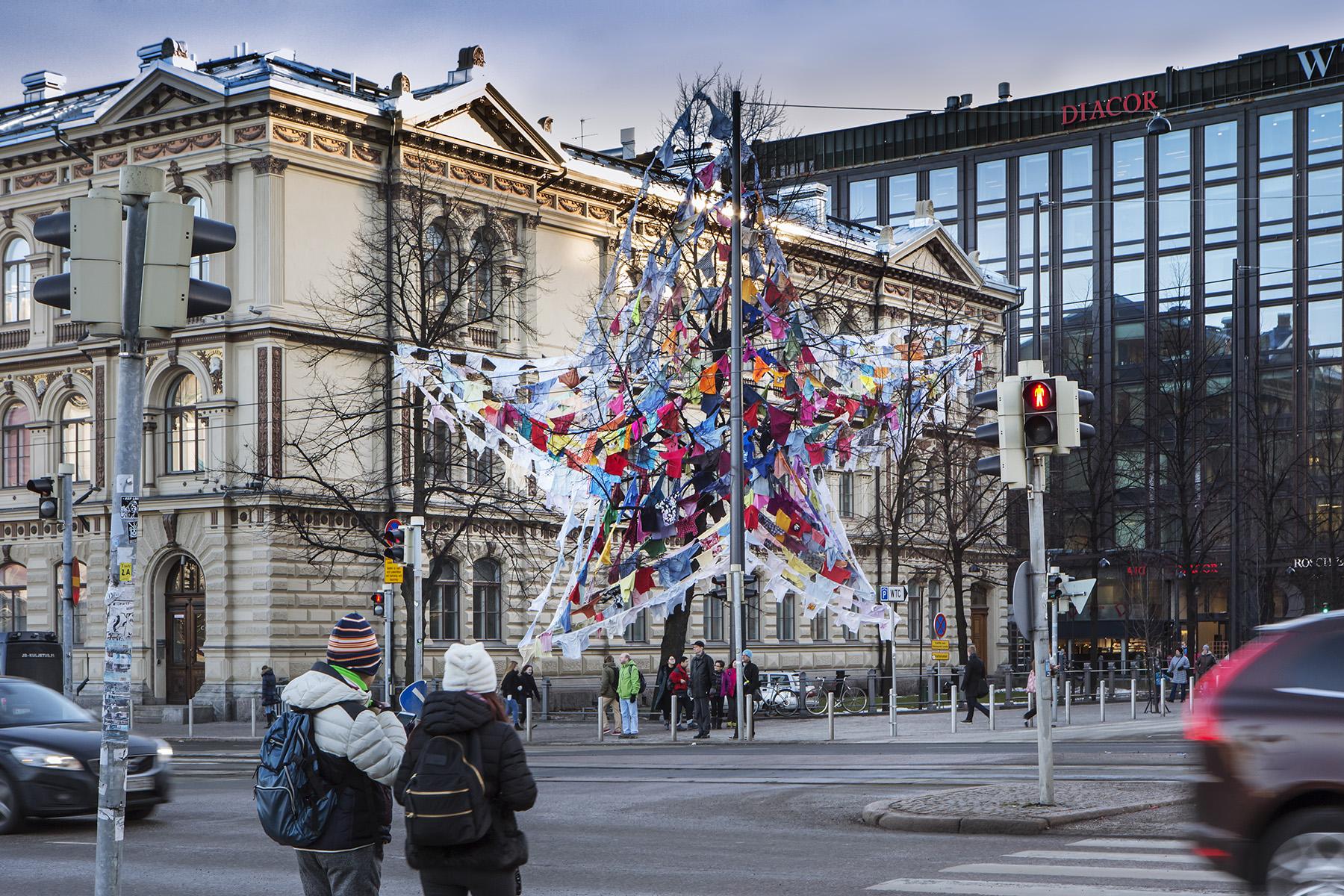 Sculptor Kaarina Kaikkonen (b. 1952) uses used clothes as the material of her works. Among her best-known works are Way, which was created from men’s suit jackets on the stairs of Helsinki Cathedral in summer 2000, and Life Paths, which was shown near the Helsinki Old Church Park in summer 2011. In recent years, Kaikkonen’s installations have been displayed around the world, including in Chile, the UK, Italy and the United States.